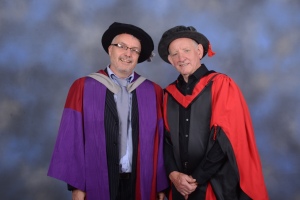 I had the honour last week of presenting a talk prior to Rockfield Studio owner Kingsley Ward receiving a Fellowship from my university. I have copied a transcript of the talk below for those that are interested.

Pro-Chancellor
I present to congregation, Kingsley Ward, for the award of Fellow of the University. Kingsley is the driving force behind Rockfield Studios, a recording studio just outside the village of Rockfield, near Monmouth. This recording studio is one of the most important recording studios in the history of British popular music – a place where some of its most prestigious recordings have taken place over the last 40 plus years.
The origin of Rockfield Studios goes all the way back to 1961. Kingsley’s, first studio effectively began with a simple mono recorder, which was used to record his brother Charles’ acoustic guitar based songs. The duo – the Charles Kingsley Combo, were then working the pubs and clubs of South Wales, and like many young songwriters, had little idea what to do with their creative output. Having met George Martin, who later of course was to find fame producing The Beatles, they soon found themselves with a recording contract, and were soon travelling to London to work with another iconic record producer – Joe Meek. Influenced by Meek’s ‘do it yourself’ mentality, Kingley and Charles decided to set up their own studio back home in Wales. It was this studio, which started in their parents’ attic, which was later to become known as ‘Rockfield’. Starting off as a ‘demo’ studio, in the early 1960s, by 1965 the studio had moved into the granary of their parents’ farmhouse, becoming one of the first recording studios to offer ‘residential’ opportunities for musicians.

In 1969 a second studio was built, The Coach House Studio. This studio incorporated an important piece of technology – an eight-track recorder, a rarity outside of central London at that time. One of the first groups Kingsley recorded in the new space was none other than Black Sabbath, who after forty plus years are still recording at Rockfield. This new space also provided Rockfield with its first number 1 record in the early 1970s: Dave Edmunds’ – ‘I Hear You Knocking’, recorded in the Coach House Studio with Kinsley as engineer and producer.
A third studio was constructed in 1973 in the large stable block of the farmhouse – The Quadrangle Studio. One of the first groups to record in this new studio were Queen: who recorded Sheer Heart Attack and A Night at The Opera. The latter included large parts of the song ‘Bohemian Rhapsody’ – one of the most iconic songs in the history of popular music.
Today, Rockfield is one of the very few independent recording studios surviving from the 1960s. It still proves to be an amazing environment and location in which to record music and is undoubtedly one of the most prestigious and historically important recording studios in the world. In addition to those already mentioned, artists that have recorded there are too numerous to mention, but include, in no particular order, Simple Minds, Robert Plant, Paul Weller, The Stone Roses, The Charlatans, New Order, Budgie, Bullet for My Valentine, Judas Priest, Moterhead, Rush, Oasis and Coldplay. The list goes on.
Kingsley’s drive and ambition to build a company out of nothing, the ability to seize an opportunity and to develop his ideas over time and not be afraid to change those ideas if needs be are legendary in the industry. To take risks in investing money and not being afraid to follow his own instinct, for example when buying Neve consoles at a time when no other studios were doing so, or to then sell those consoles and replace them with vintage equipment at a time of technological advancement, represent characteristics in a person that is a leader in their field.

Today, Rockfield is still a family run business, with Kingsley at the helm. It now not only offers top recording facilities, but also Recording Masterclasses to assist young student engineers and producers. Indeed over the last several years, under the guidance of course leader Andrew Gwilliam, who nominated Kingsley for the award, and who helped me greatly in the detail of this presentation, some of our own students at the University of South Wales have benefited from visiting Rockfield and from Kingsley’s expertise.

Kingsley is passionate about what he does at Rockfield and all that it stands for, not only within and for Wales but also globally. When it started back in the 60s he was told by the mainly London based record industry that it would never last, being so far away from the epicentre of the industry. This perception has certainly been proved wrong!

Kingsely has made a significant contribution to the musical and cultural life of Wales and the recording industry. Pro-Chancellor, it is for these reasons that I present to congregation Kingley Ward, for the award of Fellow of the University.

Academic working at the University of Glamorgan
View all posts by Paul Carr →
This entry was posted in Music Industry and tagged Kingsley Ward, monmouth, rockfield, rockfield studios, University of South Wales, Wales. Bookmark the permalink.