The Lost and Found Musical History of Merthyr Tydfil

So, after around two years of planning, the Lost Musical Histories of Merthyr Tydfil exhibition was launched on Saturday 27th of January. It was launched by a one-day symposium, and featured speakers from both Wales and around the UK, ranging from established academics, archivists, to industry lobbyists.

The morning engaged with the sustainability of local music making, with subject matters ranging from music policy making in Wales to live music campaigning. These discussions were complemented in the afternoon by some ‘hidden history’ narratives not only about Wales, but also from other locations in the UK. How do they relate to Wales and what can we learn from each other?

The audience consisted of a mixed demographic, including musicians and family members of musicians featured in the exhibition, community members, the music industry, colleagues from local councils and also academia.

I hope the exhibition and the symposium gives the Welsh music industry, government policy makers and the public at large an opportunity to step back, look back through the lens of time and appreciate the importance of how popular music contributes to our culture. For me, without the real sustainability of local music, we have a lopsided music industry and a subsequent history that is somewhat imposed from above, as opposed to reflecting the culture from below.

The donated photographs have come from as far afield as New Zealand, with many of them being seen in public for the first time. These visual stories not only depict the rich musical history of Merthyr, but also the cultural importance of local popular music making in the Valleys. Indeed I would argue they represent the importance of local music making generally – I really don’t think it is celebrated enough. It is why I am so grateful for the work the Womanby Street campaign has done in safeguarding the local scene in Cardiff for example. With Cardiff soon to become one of the UKs first ‘music cities’, I hope the impact of this reaches out to the Valleys, and that the memories experienced by both the musicians and audiences will have a legacy that will be analyzed positively, in events such as this in the future.

So what I have copied below is a copy of my exhibition launch speech for those that could not make it. The exhibition runs over the next month, so please take the opportunity to attend. Please tweet at #merthyrpop 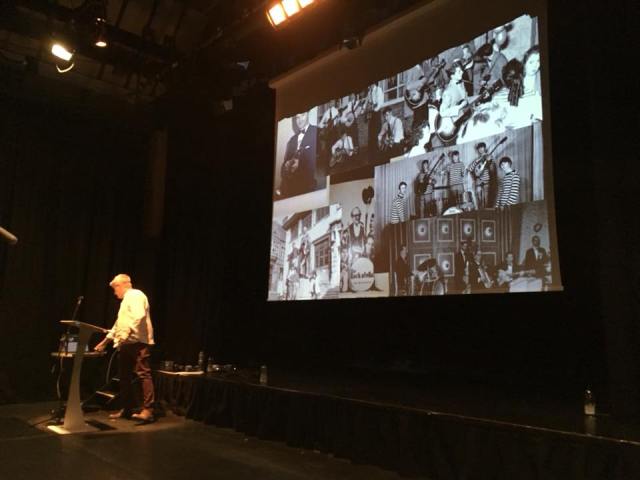 The Lost and Found Musical History of Merthyr Tydfil

Once the largest town in Wales, Merthyr Tydfil has a rich and very proud industrial history. Although often associated with the production of coal, at the peak of the Industrial Revolution, the town’s iron works were the most productive in the world, bringing high levels of employment to the area. In modern times however, like places such as my hometown of Newcastle, the town is usually characterized in the press through its apparent deficits: stories of lower than average life expectancy, high rates of long-term illness, large numbers of people claiming benefits and poor educational attainment are rife. Recent TV programmes such as Channel 4s Skint (2015), MTV’s The Valleys (2012-14) and BBC Three’s Valley Cops (2017) have added new negative stereotypical dimensions to this narrative in the town and surrounding area, which are both unfair and unjust.

However, this exhibition intends to celebrate an alternative cultural history, a more positive narrative of Merthyr: popular music making and engagement between the years 1955-1975. This period was chosen because it is between these times that rock ‘n’ roll began to take over from big bands and when live music opportunities noticeably abounded in the town. It was also deemed important to capture the memories generated between this time period because they will eventually disappear. I have lost count of the number of times that I have been told a now deceased member of the community could have provided invaluable information, but is no longer with us. This ensures that the present opportunity is not missed to link together what Jan Assmann describes as communicative and cultural memory, internally remembered oral histories that are linked to identity and “external objects as carriers of history”. As Assman states, our memories exist “only in constant interaction, not only with other human memories, but also with “things”, outward symbols” that “carry memories we have invested in them” (111). This exhibition and the work we done as part of the Being Human Festival in November are hopefully examples of initiatives that facilitate this union.

In order to give community memories some initial context, I decided to initially position popular music activities in Merthyr via the lens of what Pierre Nora famously describes as “sites of memories” (Lieux de Mémoire) (Nora, p. 7, 1989), artificial placeholders for the no longer existent, natural collective memories. These include institutions such as archives, museums, cemeteries and of course exhibitions. The problem when dealing with the hidden musical histories of Merthyr is that the ‘sites of memory’, or ‘carriers of history’ either don’t exist, have had little attention, or are not immediately apparent. Therefore, if we accept that music making of any sort can’t be disassociated from place, the project’s initial impetus included encouraging reflection upon Merthyr’s key music venues of the past.

While some of these buildings have been appropriated for other uses as the years have progressed, others have fallen into a state of disrepair or have been demolished, therefore existing only in the realm of memory. However, all of these buildings, whether in situ or not, represent a symbolic representation of the community based musical activities that took place many decades ago. It is these buildings of course that facilitated both the musical activities and the associated social interactions, alongside other less visible ‘carriers of history’ – the musicians who made the music and the audiences who attended the concerts.

As some of you know, in November, I conducted a series of intergenerational activities, funded by The Being Human Festival and First Campus. Via Dowlais Library, this project initially facilitated communities, who remembered musical activities between 1955-1975, to learn about, reflect and document their personal recollections of the period.

Memories were triggered by encouraging the community to engage with ‘memory boxes’: compiled recorded and visual media, drawn from the developing photographic archive, donated by the community. This was followed by a series of workshops with primary age school children in the town, who were given the opportunity to discover, via reenactment, some of the hidden ‘musical histories’ provided by the older community.

These reenactments were performed at Theatre Soar on November 25th 2017, less than a week after they were developed, with the scripts being entirely improvised by director Peter Morgan Barnes.

What was interesting in the feedback we received from schools, was that the children felt they not only learnt about their local history, but were actually given the opportunity to ‘feel’ like the community members who donated the stories. A sound pedagogical benefit I would suggest, that I hope to take forward.

In many ways, this project provided the perfect pre curser to this exhibition, as it reinforced the importance live music plays on the development of community and its consequent heritage. Some of the community members who engaged with the Being Human event had not met each other for many years, despite the fact that they played such an important part in the history of music making in the town. 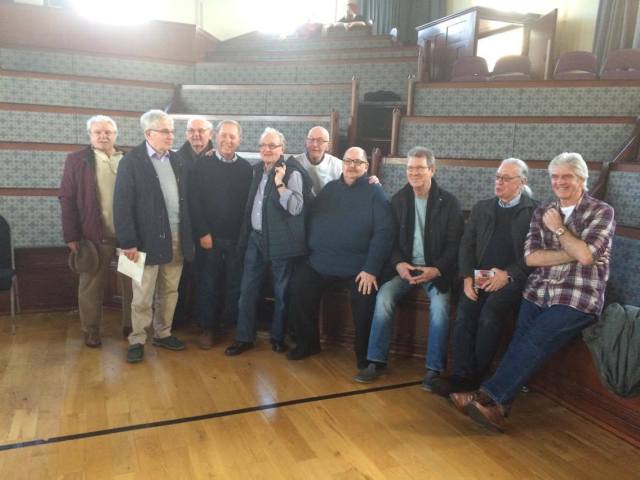 Gerald Mogford standing next to his photo of the days he was playing in The Dynatones. Photo Courtesy of Catrin James

Jeff Lewis pointing out his days in the Cheatin’ Harts. Photo Courtesy of Catrin Sarin

Son of Man guitarist George Jones, standing next to a photo of his grandfather, who played steel guitar in an unnamed band. Photo Courtesy of George Jones

Although understanding the relationship of ‘hidden history’, nostalgia and identity construction is the underlying ‘research angle’ of the exhibition, the forward facing community aim is simple: to safeguard local popular music heritage for future generations, by not only housing and making visible existing documentation, but attempting to generate a wealth of new material, created by the community, for the community. Eventually, I hope this exhibition provides the impetus to develop a continually evolving, local narrative of popular music, which resonates with the more dominant popular music narratives that have already been written.

The exhibition includes much memorabilia, ranging from the big band era and skiffle music of the 1950s, visits by the likes of the The Small Faces, Pink Floyd and Hermans Hermits in the 60s, to the staggeringly large lapels and flares of the 70s ::, to the many photographs and ‘oral history’ accounts of local musicians and audiences.

In addition to providing a new ‘site of memory’, it is hoped that this exhibition will capture the two categories of nostalgia outlined by Svetlana Boyn – reflective and restorative. Boyn describes restorative nostalgia as a “transhistorical reconstruction of the lost home” and I would suggest that both the Being Human event work and this exhibition provides an excellent example of this, providing opportunities for communities who remember the actual events and those who don’t to reflect and learn from their past, their history, their memories and their heritage. Most important, if offers up opportunities for both young and old to make sense of it. 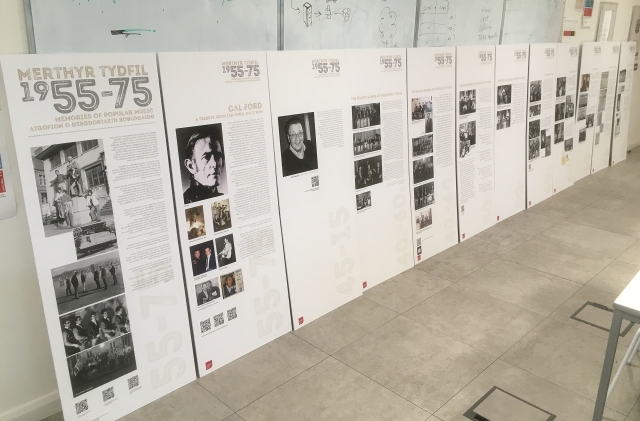