I finished one of the most satisfying experiences of my musical life last week, when we completed an eight day series of events, which involved capturing important musical memories of the community of Merthyr Tydfil.  These memories were subsequently taught to school age children in local schools, who reenacted the memories of their musical heritage.  The ‘memory capturing event took place in Dowlais library, during which some community members met up again for the first time in nearly 50 years, so it was a really profound experience. During the session, which was prompted by a lecture by myself and specially made ‘memory boxes’, memories were uncovered that many of the community members did not even realise they had. Essential work that was not only therapeutic for the community, but great material for the reenactments that were devised in local schools the following week.

Here are a few of the musical memories we captured during the day. All recordings were documented by DigiChemestry.

Once the memories were complete, we then entered two local primary schools to teach the children about the memories. This was followed by director Peter Morgan Barnes improvising scripts, that were taught to the children and annotated by Jane Ellis from First Campus. I think the photos speak louder than what I could describe here in  terms of the how much the children enjoyed and learned on the day. 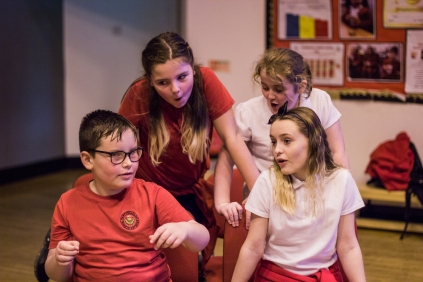 The week completed by a session at Theatr Soar on Saturday November 25th. The event was very well attended by the community, who left some fantastic tributes as outlined below.

Sheila Spencer: Just spent a lovely hour in Zoar listening to musical memories and the children performing were great. I met some people I haven’t seen for about 47 years. Thanks to all those who put a lot of effort into this afternoon

A great afternoon mixing talents of the past and those of today’s young school children. Looking forward to the January exhibition in the Red House

Thoroughly enjoyed this afternoon. The kids and production team worked so hard to nail that performance in less than a week! Well done to all

Stuart Davies: A wonderful afternoon so proud of the children, and lovely to meet old friends, pretty sure it’s brought back great memories to so many people, thank you Paul

Frank Janes: Lads and lassies, I’m just back from Zoar theatre in Merthyr after watching a production by professor Paul Carr of children acting out musical memories of Merthyr. The children were first class and I have to mention one memory that they performed. It was a memory of Aberfan and the bands that performed at that time to raise money for the disaster. … The children were on stage dancing and playing. Suddenly, as one, they stopped. Some children lay on the floor, others turned their backs to the audience and the theatre went quiet. The children re enacted that fateful day in the only way possible. The children of today remembered the children of yesterday who went to sleep that morning… I, as did others, cried. I have been in the company of old friends today, and that memory I will cherish……. The memory that the children imparted on the audience will not be forgotten by everyone in the theatre…. Well done and thank you.

I really enjoyed the afternoon the children were great. Happy memories.

Sheila Spencer: I thought the part about Aberfan was beautifully done, as well as the whole performance of course. Thoroughly enjoyed it.

Frank Janes: Your production touched everyone yesterday Paul, indeed the children will carry a special memory

Allan Jones: Thoroughly enjoyed this afternoon. The kids and production team worked so hard to nail that performance in less than a week! Well done to all

Irene Janes: A great afternoon mixing talents of the past and those of today’s young school children. Looking forward to the January exhibition in the Red House

Stuart Davis: Had a lovely afternoon in soar chapel in Merthyr on Saturday as part of the history of popular music in Merthyr between 1955 to 75 it was so great to catch up with Ken Arthur, Keith Sussex, and Gerald Mogford. I’ve spent quite a few years playing with Ken and Keith from 1965, they were in the first group (The Villians ) alongside The late Bobby Watkins that I played with, then in the late 80s we reformed for more than a few years until Bob was taken from us, those boys were like a family to me, so it was great to meet up again and remember some great memories

Louise Bibby headteacher at Gwaunfarren: I just wanted to say a big thanks for the wonderful performance today. I was so impressed! The children and parents thoroughly enjoyed it. It was a wonderful way to get a greater understanding of the musical history of the town and also to work with another school. Please could you pass on my thanks to your team and we hope we will have the opportunity to work with you again. Please could you send us any materials that we could use as a learning tool with the rest of the school?

I will add more information to this page once it comes in, including an ‘impact video’ and also a documentary, but in conclusion, just to say that I think this sort of research is essential not only for the maintenance of local heritage, but also to ensure that local history is written into the narrative of popular music. So many of the people I spoke to had memories and experiences that resonated with that of the main stream. Bands moved to London and Hamburg in the 60s, people frequented rock ‘n’ roll gigs during  the week and dance events at the weekend, supported famous artists and saved up for early versions of famous guitars. If we are to have a rounded history of popular music, these historic memories need to be documented for future generations and understood as a version of local heritage. Thank you to Being Human for assisting us to do this. I am off to New Zealand next week to talk about it some more – looking forward to it.