While working on my book on Frank Zappa, I am currently reading a lot of Roland Barthes, and have started to consider how some of his ideas can apply to music. There is a really interesting chapter in his book Image, Music,Text that discusses the ways in which the text of an advertising poster interrelates with its image. After asking the question – which of the two (image or text) are the dominant force, Barthes takes as a starting point that all texts are polysemic in nature, essentially regarding them as a stream of potential meanings that are given cultural authenticity via both the author and the interpreter– i.e. us (although he does consider the semiotic meaning to be either ‘obvious’ or ‘obtuse – but that’s for another post)!

As many of you will know, the nature of polysemy goes all the way back to the Greek philosopher Protagoras, who believed that ‘man is the measure of all things’, a view that was in direct opposition to Plato, who considered art to be a sort of reflection of a perfect ‘world of forms’.

Barthes is also interested in the relationship between the image and the text, and how the latter can be ‘neutralised’ by the former.

Anyway, how does all of this relate to music? If we take as red that a piece of music has an array of potential meanings, how does the author manipulate this? I see this working on two levels.

1) How can the text/image dialogic apply directly to albums covers etc?

2) How do lyrics interrelate with music – or vice versa?

I have no chance of covering this in one post, so I thought we could start with album covers. If we take as an indicative example Frank Zappa’s ‘The Perfect Stranger: Boulez Conducts Zappa’ 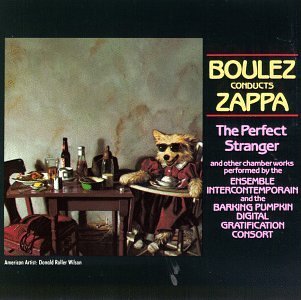 When looking at Zappa’s album, it is apparent that he has adopted the pervasive practice of placing his (the composers) sir name alongside the conductor, with the former having marginal hierarchical importance by appearing at the top right of the cover. This juxtaposition often represents an exclusivity between creator and interpreter, effectively reducing the room for the fan’s interpretation of the music, something which encourages a formalistic view of art, with  ‘value’ not being  impacted the ‘receivers’ reaction. In Zappa’s case however, it is  interesting to note how the  text has irregular lines, somehow bridging the gap between mechanical/automated and ‘man made’ reproduction, something that resonates strongly with Zappa’s DIY philosophy. It also has to be noted that the colour of all the text seems to clash – accenting Zappa’s ‘cut and paste’ philosophy. However, it has to be acknowledged that these signifiers are small when compared to the entire  Zappa cover, and havean interesting resonance when placed alongside a much larger painting by Donald Rolar Wilson of ‘Patricia the Dog’, a conceptual continuity character that Zappa incorporated on two other albums he released that year – ‘Them or Us’ and ‘Francesco Zappa’. Although the content of this painting could appear to be irreverent when compared to the Boulez Conducts recordings outlined below, it is more the nature of the painting when compared to a photo that is of interest here.

As part of this series, Pierre Boulez, conducts the work of a range of composers such as Weben, Mahler and Stravinsky, and aside from the musical content of these recordings and the brief textual analysis depicted above, the CD covers leave one with no doubt of the high art value of the product. For example, the signifiers of the ‘pose’ of Boulez himself (a very conservative character with a long tradition in high art music), the ‘traditional’ looking logo of the record label, the positioning of the armchair (which Barthes would describe as an ‘object’), and the above mentioned juxtaposition of conductor and composer – all indicate high art. Additionally, note how the straight lines of the text, contrast strongly with Zappa’s more freeform style. 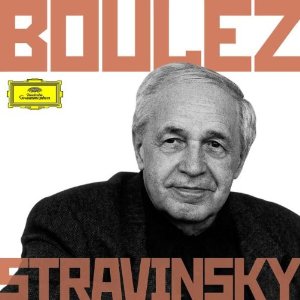 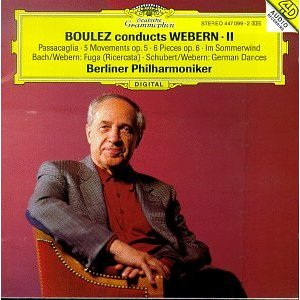 Barthes describes the paradox of the photograph as ‘a message without a code’, whose relationship of signifieds to signifiers tend to record as opposed to transform  their subject matter. The conative as (opposed to donative) capacity of album cover art is used by Zappa on countless albums, and a look through his back catalogue confirms that he used cartoon type images on numerous occasions. Something which give his music the multifaceted meanings he was interested in.

Ok, I have ran out of steam now. Will come back when I have time to think about the impact of this on the music itself.