Due to DIY responsibilities at home, I have spent most of the day listening to some great music – something that has prompted this post. The main album I listened to today was the 60 track Plunderphonic compilation by John Oswald. After coining the term in the mid 1980s – what is interesting about the technique is the issue of using copyright material overtly – without getting sample clearance. Unlike some artists – who use sampling as a starting point for creativity – then ensure the original sample is disguised beyond recognition – Plunderphonics ensures that the samples are obvious – it is in effect a protest against the restrictions of copyright. Unlike later uses of sampling – from what I can gather – a Plunderphonic piece often just uses samples from one artist and in Oswald’s case – he uses a similar cut and paste philosophy on his albums covers – 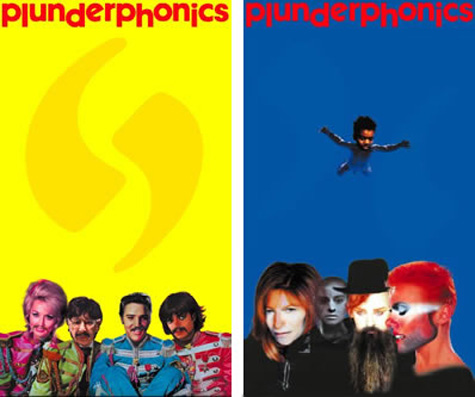 Oswald seems to be a forerunner of Mashups – although I rarely see his name credited. When listening to the album – it seemed to be full of so much meaning for me – as I heard ghostly snippets of tracks I either recognised directly, or ‘sort of recognised’ from my childhood. In fact many of the tracks were full of Primary Meaning – rare in popular music.

Although I don’t understand how it got copyright clearance – the entire album can be heard on Spotify. I suggest you put a few hours to one side – and see what it means to you.

I recon that the Primary Signification is age related – with many of the tracks possibly become less obvious to listeners as the years go by. It may be that younger people may not get any direct Primary Meaning what so ever!

I have written about this sort of thing before – but it will be interesting to consider at some point how the copyright laws can be tweaked to ensure this sort of creativity can take place – it’s great music in my view. If it is passed on without being ‘sold’ – why can’t composers legally engage with this sort of process?

I suggest you listen to the album – check out the essay below – then see what you can recognise. After that – look at the album notes – which has details of what what the samples are.

Plunderphonics Essay from 1985 by John Oswald