Well, after hearing about the infamous Pink Floyd gig that took place in Merthyr Tydfil towards the end of 1968, I have eventually found some evidence. In some of my previous posts on this, some people were unsure if Syd Barrett or Dave Gilmore done the gig – well I can now (sort of) confirm that it was the latter – although there is still come uncertainty (see below). Pink Floyd were actually supporting Peter Frampton’s The Herd, with Ebbw Vale base The Firm representing the local band. The gig took place on December 9th 1968.

When one thinks about it retrospectively, the paring of Pink Floyd with The Herd is an unusual choice by the promoters, with it in some ways resembling the early gigs that Hendrix done with the Monkees. What is verifiable is that the iconic version of Floyd did play the town, so   I am after  memories. This is the line up that played in Merthyr – note there are only four musicians – and no Syd Barrett!

Here they are meeting some local fans 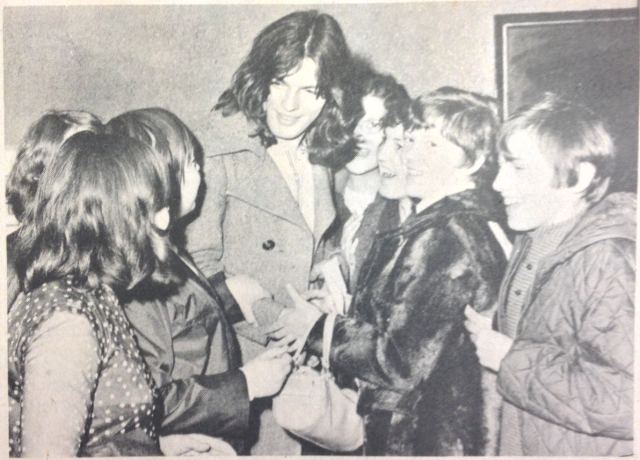 Newspaper reports at the time outline how fans who occupied the 5 shilling seats in the balcony were allowed to come downstairs for the second part of the show to watch The Herd. Not long before appearing, The Herd had release ‘From The Underworld’, so by this time were fully fledged pop stars.

Other songs played by The Herd included Dylan’s ‘I Want You’, and also The Righteous Bros ‘I Lost That Loving Feeling’. They also played their biggest hit ‘I Don’t Want Our Loving To Die’

Pink Floyd closed the first half of the show and apparently used “a variety of electronic gadgetry” that produced “weird and unusual sounds” – although the light show they normally used was not part of the Merthyr gig. Interestingly, the newspaper report said many of these sounds came from “Syd Barrett’s electric guitar“, although the picture above proves this not to be true. With Barrett leaving the group several months before, the author was obviously confused. The music they played on the night included ‘Set the Controls for the Heart of the Sun’ and “Astronomie Domine’ from Pipers at the Gates of Dawn. ‘Set the Controls for the Heart of the Sun’ is known of course as the only song to feature both Sid Barrett and Dave Gilmore.

So – I am after more memories of this iconic gig. Please get in touch.

Academic working at the University of Glamorgan
View all posts by Paul Carr →
This entry was posted in Merthyr, Musicology and tagged Dave Gilmore, Floyd, Merthyr Tydfil, Pink Floyd, Sid Barrett, The Firm, The Herd, Wales. Bookmark the permalink.

8 Responses to Pink Floyd in Merthyr Tydfil: The Evidence!