I recently read an excellent article about the stage premier of Frank Zappa‘s 1979 album – Joe’s Garage. It is great news that his wife Gail has eventually conceded to putting on a stage production of the show, although this reminded me that this was in fact not the first production. There was a 1999 production based at the University of Michigan that featured ex Zappa side man Ike Willis as a special guest. Although not given the blessing of the Zappa Family Trust, a recording of the production can be obtained here, and from what I can remember it is extremelly well performed. 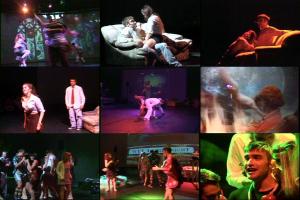 Alongside my colleague Richard Hand, I have undertaken several research projects into the work of Frank Zappa in an attempt to investigate what makes this musical genius tick. The first of these projects was an investigation into interdiciplinary teaching using Zappa as a conduit. This was achieved by working with drama/music students on a stage production of another great piece of Zappa musical theatre – Thing Fish. Although the work was never performed in public, it proved to be an interesting case study in how students of different artistic disciplines can work together, using Zappa compositional techniques such as project/object and Xenochrony as creative inspiration.

This was then followed by a 2007 published paper which focused on Zappa’s incorporation of musical theatre into his work. The paper discusses Joe’s Garage and Thing Fish in detail, but also argues that much of Zappa’s portfolio had a consistent narrative that was theatrical in nature. Surprisingly, there has been very little academic work written about Zappa, and aside from people such as Ben Watson and Michel Deville/Andrew Norris, there is a substantial gap in the market. Mine and Richard’s last paper was an investigation into how Zappa fused musical genres through the use of gesture, and we are currently preparing for a conference in Germany which will focus on the pervasive relationship of Zappa and sex. That’s about it for this post, but I would be pleased to hear from anyone who is interested in Zappa’s work.

1 Response to The Great Frank Zappa